A viable population of the brown garden snail - Cornu aspersum (O. F. Müller, 1774) - was found in April 21, 2015 in central Slovakia for the first time. The species is native to the Mediterranean region (including Egypt) and western Europe, from northwest Africa and Iberia, eastwards to Asia Minor, and northwards to the British Isles.

Details of the first record:

(for other records see the map below) 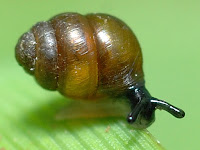